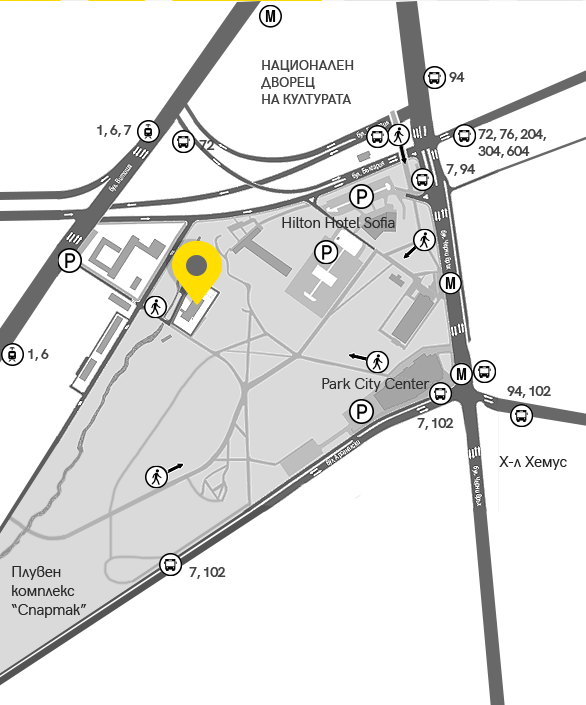 The Toplocentrala project is a joint initiative between a group of artists from the independent art scene and Sofia Municipality, which was launched in 2014 with the main idea to transform the former heat plant of the National Palace of Culture, built in 1981, into a Centre for Contemporary Arts of modern European type.

In the spring of 2014, the city of Sofia is preparing its candidacy for the European Capital of Culture, and the independent art scene is in the process of organizing a Big Meeting in Sofia of the world's largest performing arts network, IETM.

The decision is made to include three possible locations in the city / one of which is the Heat Centre / in a three-day work group during the IETM meeting / 16-19 October /. 65 foreign experts enrolled in the work group and after visiting the three locations they voted for each one, based on five different criteria. The heating power plant emerged as the convincing winner and in the next two days of the meeting, with active international participation, the first foundations of the project's vision and mission are laid down. The day after the international meeting, on the 20th of October 2014, the Mayor of Sofia, Mrs. Yordanka Fandakova, recognized the cause of the initiative as an exceptional opportunity to develop the cultural image of the capital and invited the core of the working group for a meeting in her office. This was the beginning of a large-scale working process between the municipal administration, coordinated by Malina Edreva - chairman of the Standing Committee for Education, Culture, Science and Cultural Diversity in Sofia City Council, and the non-governmental organization - Topocentral Association, coordinated by Veselin Dimov, which process was also supported by foreign cultural institutes in Sofia and several international networks.

In 2015, three project models were created / a performing arts centre, a hybrid centre with a private initiative and a centre including visual and musical arts /. The third of these models was selected and developed in detail in 2016 and published in a booklet as the Final Model for “Toplocentrala” Centre for Contemporary Arts. In addition to that many debates, public meetings and consultations were held with people who have already established similar centres in other countries. Visits to similar existing centres were organized - the trend to transform industrial urban architectural heritage into centres for independent contemporary culture has an established history in Europe.

In 2017-2018 an open architectural competition, organized and funded by Sofia Municipality is held with international participation and jury, which collects 63 proposals. It was won by young Bulgarian architects Mariana Serbova and Anton Kolev.

See all the competition entries here

In April 2019 the Sofia City Council voted funds for the renovation and equipping of the Centre, and later in the year a public tender for a contractor was held, won by the construction company "Bulstroy Group".

In June 2020, the actual reconstruction of the building began.

In the meantime, negotiations for including the centre in the funds of the Ministry of Culture were initiated, culminating successfully in the summer of 2021 with a Decree of the Ministery council for the establishment of the Regional Centre for Contemporary Arts “Toplocenrala”.

To enhance the quality of cultural life in the capital by creating a space that will improve the conditions for the work of the broad independent scene and stimulate the development of free artists and their audiences.

To develop a variety of innovative forms of art, education, recreation, entertainment and communication among the citizens of Sofia of all ages.

To create a new model and a good example for the creation of future art centres in Sofia and Bulgaria.

To raise the public profile and visitor numbers of Sofia through the creation of an attractive cultural tourist site of international importance in the capital.

To open Bulgarian contemporary art and culture to international interaction through the implementation of joint projects with other similar centres, organisations and artists abroad.

A strong focus in the centre's ongoing activities is the education and youth engagement (through regular workshops, seminars, lectures and other educational modules)

Regular public discussions, debates, round tables and other forms of community communication

The possibility of holding regular outdoor events and free performances to promote and involve, through the means of art, a maximum number of lay people and citizens of different ages